We would like to use third party cookies and scripts to improve the functionality of this website. Approve Adventures in Freebernetes: Getting Ready to do Kubernetes the Harder Way | Running In Production With Scissors

Part 9 of experiments in FreeBSD and Kubernetes: Prep Work for Creating a VM Kubernetes Cluster

Even though I said this series was about the possibilities of mixing Kubernetes and FreeBSD when I started, I have been examining the state of virtualization, focused on bhyve and mainly Linux VMs and not really talking about Kubernetes, until now.

FreeBSD supports several x86 or OS-level virtualization options, including Xen and VirtualBox, plus the venerable FreeBSD jail(2) system (which I plan to work with in later posts), not to mention the fact that FreeBSD supports Linux binary compatibility, and let me tell you, I have not-so-warm memories chasing down all the Linux libraries I needed to run dynamically-linked binaries. However, for the experiments in this series using full virtualization of OS environments, I’ve focused on bhyve, part of the FreeBSD base system, both because it’s pretty powerful and it doesn’t require installing third-party software to use. Also, bhyve has never sparked a forced reboot of what really seemed like half of all AWS EC2 instances.

Unfortunately, no way currently exists to run Kubernetes nodes natively on the FreeBSD operating system, without use of Linux or Windows emulation or virtualization. You can still build a Kubernetes node (or cluster!) on top of a FreeBSD system, but you need to pull in another operating system somewhere to get it running.

I plan on following Kelsey Hightower’s Kubernetes the Hard Way tutorial for creating a Kubernetes cluster manually, without any sophisticated Kubernetes installation tools. Instead of installing on Google Compute Engine, I will be creating the entire Kubernetes cluster on my FreeBSD host, using Ubuntu VMs in bhyve, managed with CBSD, for the individual nodes. (CBSD is a third-party package, but as I demonstrated in earlier posts in this series, managing bhyve VMs requires a lot of manual steps, which CBSD greatly simplifies.)

I’m following the Kubernetes the Hard Way tutorial in part to enhance my understanding of the myriad interlocked components of a cluster, but also to see what, if any, adaptations may be required to get a functional cluster up in this bhyve virtualized environment.

Networking is going to be the biggest difference from the tutorial, which relies on the particular networking capabilities in Google Cloud Project. A few things I will need to figure out:

Once again, I’ll be using the FreeBSD bridge(4) (since I’m practically an expert now) (not really) and a private RFC1918 IPv4 block for all the cluster networks.

CBSD already has support for cloud-booting Ubuntu Server 20.04, but I decide to build my own disk image locally. I worked out the steps while creating the CBSD cloud configuration for Alpine Linux, which took a lot of trial and error to get working, so I may as well put that experience to use.

As I did with Alpine, I start by creating a VM from the Ubuntu installation ISO image. CBSD has a VM profile for a manual install of Ubuntu Server 20.04, so that simplifies things. I run cbsd bconstruct-tui and configure my VM. 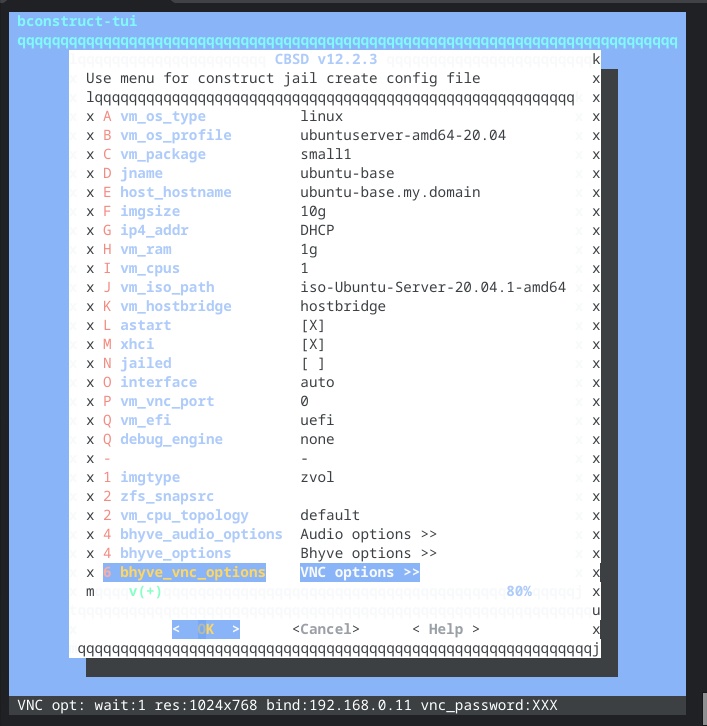 I use all the Ubuntu installer defaults, with the exception of disabling LLVM. The VM has a 10Gb virtual hard drive, and other than the EFI partition, it all goes to the root file system, with no swap space. I also enable sshd.

After the installation finishes, I restart the VM via CBSD, which automatically unmounts the installation medium, and I check to make sure that cloud-init will actually run at boot. Not going to fool me twice! (The Ubuntu installer had already installed it and configured it to run at boot.)

I stop the VM and dd the virtual hard drive image into ~cbsd/src/iso.

Next I need to create the CBSD profile. I copy the CBSD-distributed cloud configuration file in ~cbsd/etc/defaults for Ubuntu Server and update it to use my image.

The profile uses the centos7 cloud-init templates because most of the CBSD-distributed profiles use it, so who am I to argue? Alpine Linux did have some incompatibility issues with this template. If Ubuntu also has issues, I’ll have to debug that.

It Doesn’t Work On My Machine

I should test the image and configuration. Oh, right. Thus far, I’ve been creating VMs by using the CBSD text UI. I should probably figure out the command-line method, right?

CBSD imports my raw disk image and starts the VM. But when my VM boots up, it still has the ubuntu-base hostname from the disk image. It looks like cloud-init did run, but my values for this VM did not get passed in.

I dig in a bit. CBSD uses the NoCloud data source for passing the generated cloud-init files through a mounted ISO image into the VM at creation time. I assume that CBSD created the image and mount, as I’ve had no problems with booting other cloud images. Even though my installation of Ubuntu had automatically installed and enabled cloud-init (remember, I checked!), it does not seem to read the configuration on the mounted image.

It looks like I need to add a NoCloud block to the configuration in /etc/cloud/cloud.cfg. I destroy this VM and start my ubuntu-base VM to update my reference image. Then I generate a new raw image and create a new cloud VM from that. Yay, that has my new hostname, but it is still using DHCP to configure the network interface, instead of using the static IP assigned to the VM.

It turns out the Ubuntu installer disables network configuration by cloud-init, hinted at by the log entry network config disabled by system_cfg in /var/log/cloud-init.log. I remove the files /etc/cloud/cloud.cfg.d/99_installer.cfg, /etc/cloud/cloud.cfg.d/subiquity-disable-cloudinit-networking.cfg and /etc/netplan/00-installer-config.yaml, then generate a new disk image yet again. This time, it boots successfully with the static IP address I configured in CBSD.

This one was a head scratcher, but finally I realized ubuntu-test1 would not let me add the bridge’s 10.0.0.0 address as the default route: Network is unreachable. (Never mind, I had actually been setting the VM’s own IP as the gateway, which did work. I still need to reread Stevens Vol 1.) Finally I try to give the bridge a different IP address in the 10.0.0.0/8 block, and lo, that worked. Ok, whatever.

I want to test one more thing: whether I can use a single .jconf template for creating multiple VMs in CBSD. The jconf file I had generated and used for ubuntu-test1 had all the values hardcoded into it, but I need something more convenient for passing the handful of settings that need per-VM values, like the VM name and the static IP address. I edit my file, commenting out all the values that have the VM’s name (some of these are derived, such as local paths for VM state). Then I create the VM from the template, passing the unique values on the command-line.

Doing Kubernetes the Hard Way requires several command-line tools. Fortunately, people have already contributed the FreeBSD ports for all of them, so I start compiling. (I did not check if there were pre-compiled packages.)

Oh, there’s just one small detail. My VMs on the 10.0.0.0/8 network can connect to the hypervisor and vice versa, but my router doesn’t know about that private network or how to route it. I could add a static route to FreeBSD’s “public” IP, but I would rather find a more portable and FreeBSD-centric solution. I need a NAT (Network Address Translation) service. I can use FreeBSD’s firewall, ipfw(4), to create an in-kernel NAT service.

The ipfw module’s defaults make it pretty easy to shoot yourself in the foot, because it automatically blocks all traffic when you load it, which would include, say, your ssh connection. I need to disable deny-all behavior, load the kernel modules, and then add the NAT and its routing rules.

Now my VMs can make connections to the Internet, which is useful for installing stuff and that sort of thing.

With that list of tasks done, I should be ready to start creating my Kubernetes cluster from the (virtual) machine up. My next post will start from there.