We would like to use third party cookies and scripts to improve the functionality of this website. Approve Fun with FreeBSD: Your First Linux Guest | Running In Production With Scissors

The FreeBSD operating system contains innumerable powerful features. One of these features is bhyve, its native type 2 (OS-level) hypervisor, which can host virtual machines running multiple different OSes, including Linux.

This post will walk you through creating a Linux virtual machine on FreeBSD using the CBSD tool, which greatly simplifies creating and managing bhyve VMs.

Note: This tutorial is meant for a learning experiment only. It is not meant for use setting up production systems. It skips most security features and sets up no fault tolerance.

This tutorial assumes you have basic FreeBSD or Linux command-line or system administration skills and have gone through the process of installing FreeBSD.

FreeBSD has a very mature and reliable software package management system and a library of third-party packages similar to most Linux distributions. You can install pre-compiled binary packages using pkg or you can compile from source code using the ports collection.

I generally compile from ports, which allows custom compile-time options and can sometimes be more up-to-date, but pkg should be fine and definitely much faster.

FreeBSD uses a very distinctive style of interactive menus. If you compile from ports, you will see it a lot. CBSD also uses it. 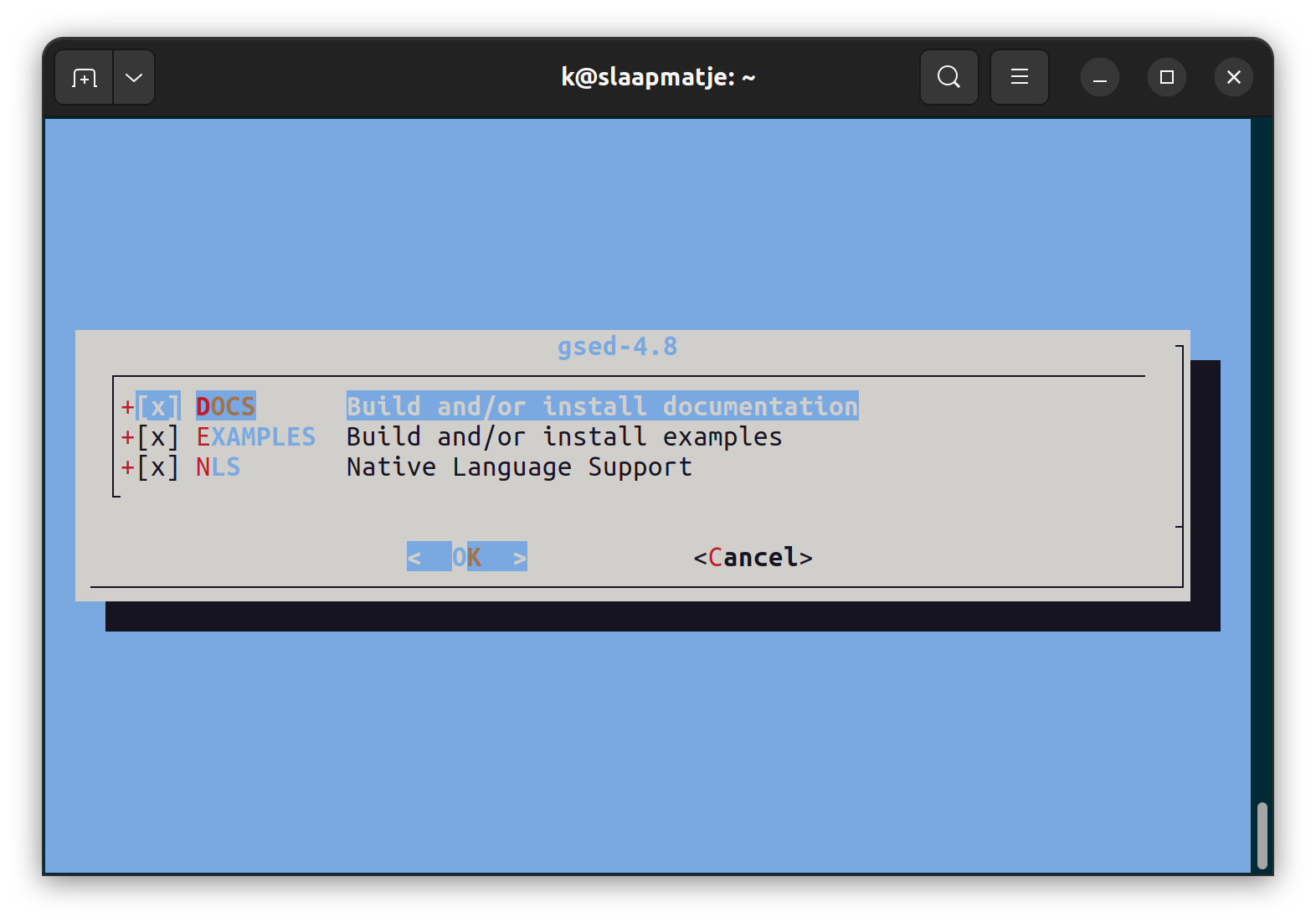 When you have finished the configuration, use the <left>/<right> arrow keys to navigate the options below the menu. Select <Ok> to confirm and hit enter.

sudo access is not set up automatically, unlike many Linux distributions. In the default installation, FreeBSD expects users needing root access to be added to the wheel group (in /etc/group) and to su to root, using the root password to authenticate. If this is an important or shared host, you can configure sudo

The root user also defaults to csh as its login shell. You probably want to install bash and use that instead.

To connect to the console of the new VM during the installation phase, you will need a VNC (Virtual Network Computing) client on a graphics-based host (for example, Windows or a Linux desktop). When connecting from a Linux host, I like the TigerVNC client, which is available as a pre-built package for many Linux distros.

These instructions assume you have a ZFS pool of reasonable size and it’s named zpool. “Reasonable size” depends on how many VMs you want to create, but let’s assume a bare minimum of 10-20Gb per VM.

You will need to install the following via the pkg command or by compiling the port. The port group is in parentheses.

Before we run CBSD the first time, we need to initialize its configuration. You can find the default values in /usr/local/cbsd/share/initenv.conf but we’re going to change a few of those.

In addition to populating /usr/cbsd (the “workdir”) and writing configuration files, the initenv subcommand given the above values will also append boot-time CBSD options to /etc/rc.conf and /boot/loader.conf.

You can run the initenv subcommand one of two ways:

Important: all CBSD commands need to be run as root

We need to set up several kernel modules. We load them now then add them to /boot/loader.conf so they will load automatically at boot time.

We’re going to select the latest available supported version of Ubuntu. Note that this may not be the current Ubuntu release. We’ll cover how to configure releases with no CBSD support in a later post.

This menu shows my configuration. You may want to tweak `jname` (the VM's identifying name), `host_hostname`, or network options.

We also want to set up our VNC endpoint so we can connect to the VM after it boots.

Navigate to the bhyve_vnc_options option and press enter to bring up the sub-menu. 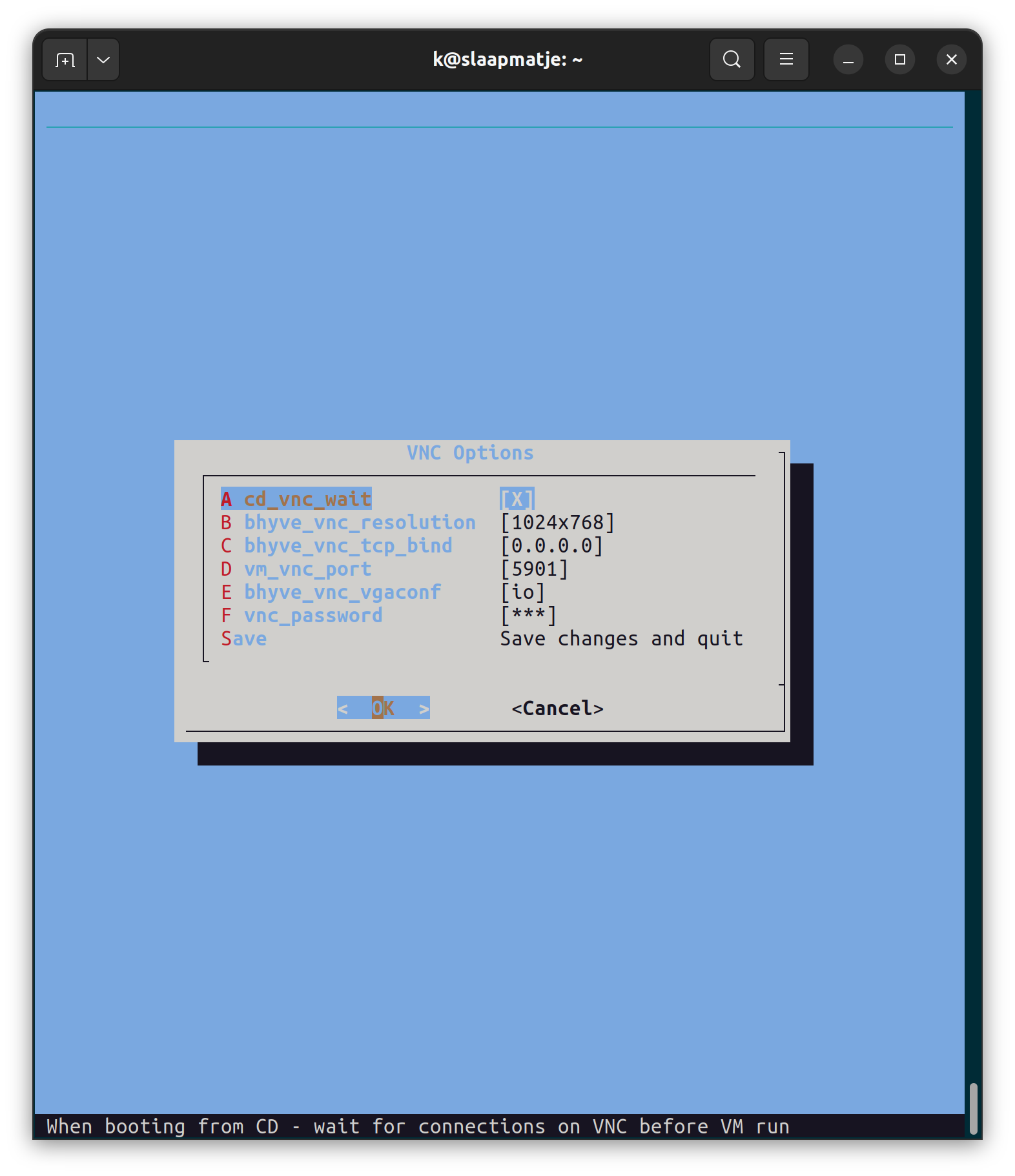 Once you’ve finished the configuration, select Ok in the main menu. You will then be asked if you want to create the vm immediately. We’ll select yes here.

Our VM still hasn’t started running, but CBSD has created its configuration. We can start the VM by running one more command.

The first time you start an image with a specific operating system, you will need to wait as the image is pulled from the internet, which can take take several minutes or more, depending on the speed of your internet connection. CBSD will try to find the fastest mirror for you. Once the image for a specific Linux version has been downloaded, though, you can re-use it for more VMs with the same version, which will speed up the process greatly.

We can check the status of our vm:

Once it starts, we can open our VNC client. For the VNC server, you need to enter the IP address of your FreeBSD host and the port that you assigned during configuration, e.g. 192.168.1.76:5901

A window should open showing the the Linux boot. Depending on how long it takes you to connect, you may see the grub boot menu or the Ubuntu installer may have already started. Go through the installation process. 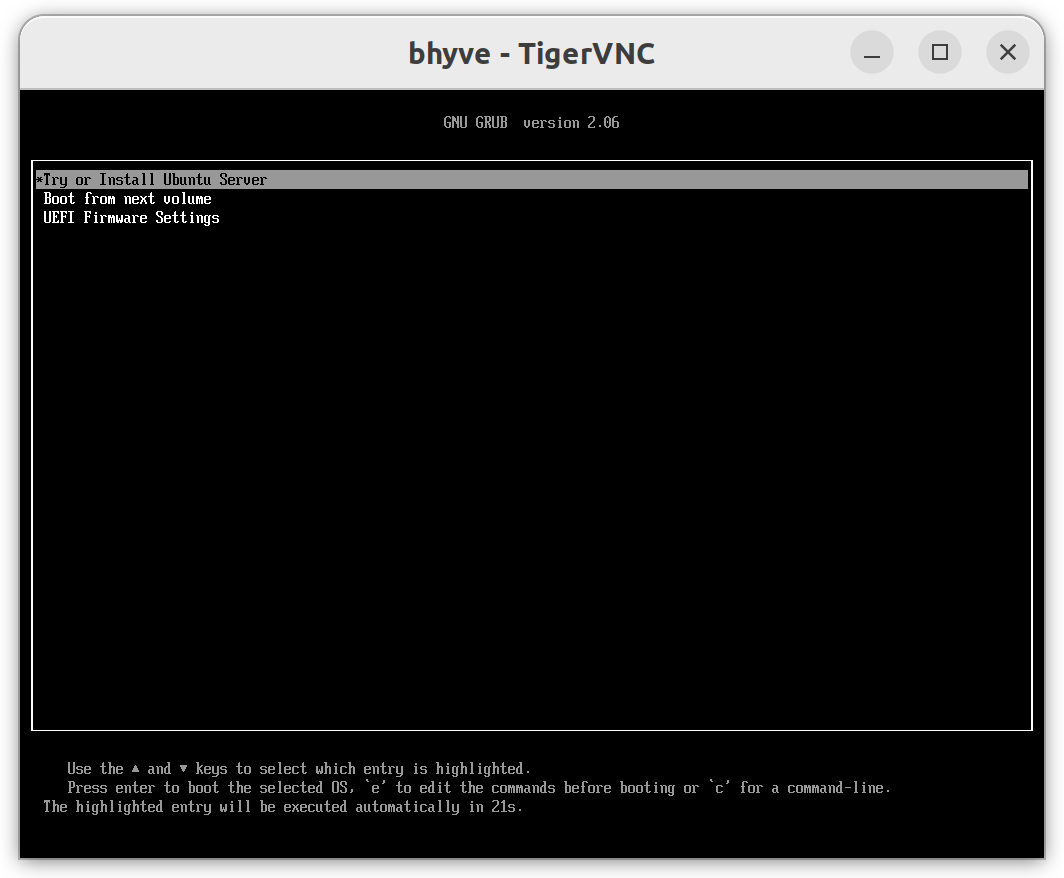 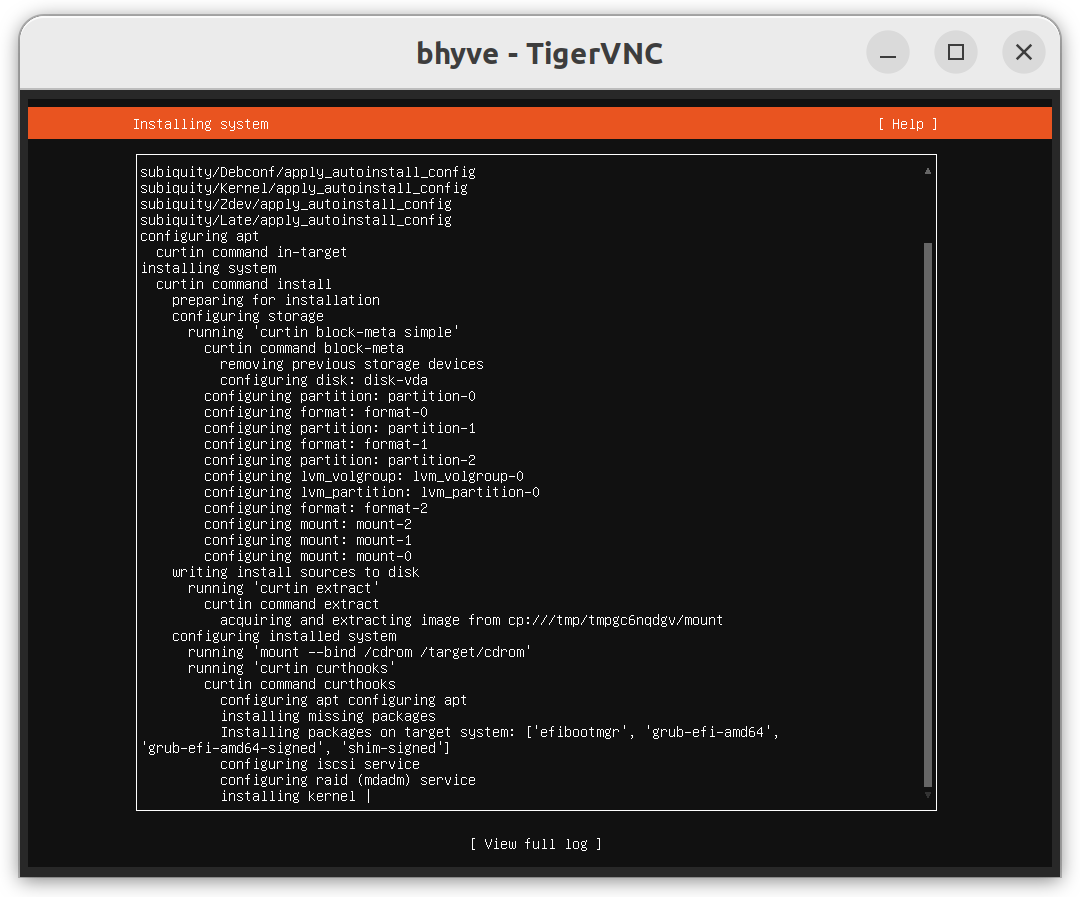 Rebooting will usually close the VNC client, forcing reconnection. The host should boot to console, allowing you to log in with the username and password you chose during installation. 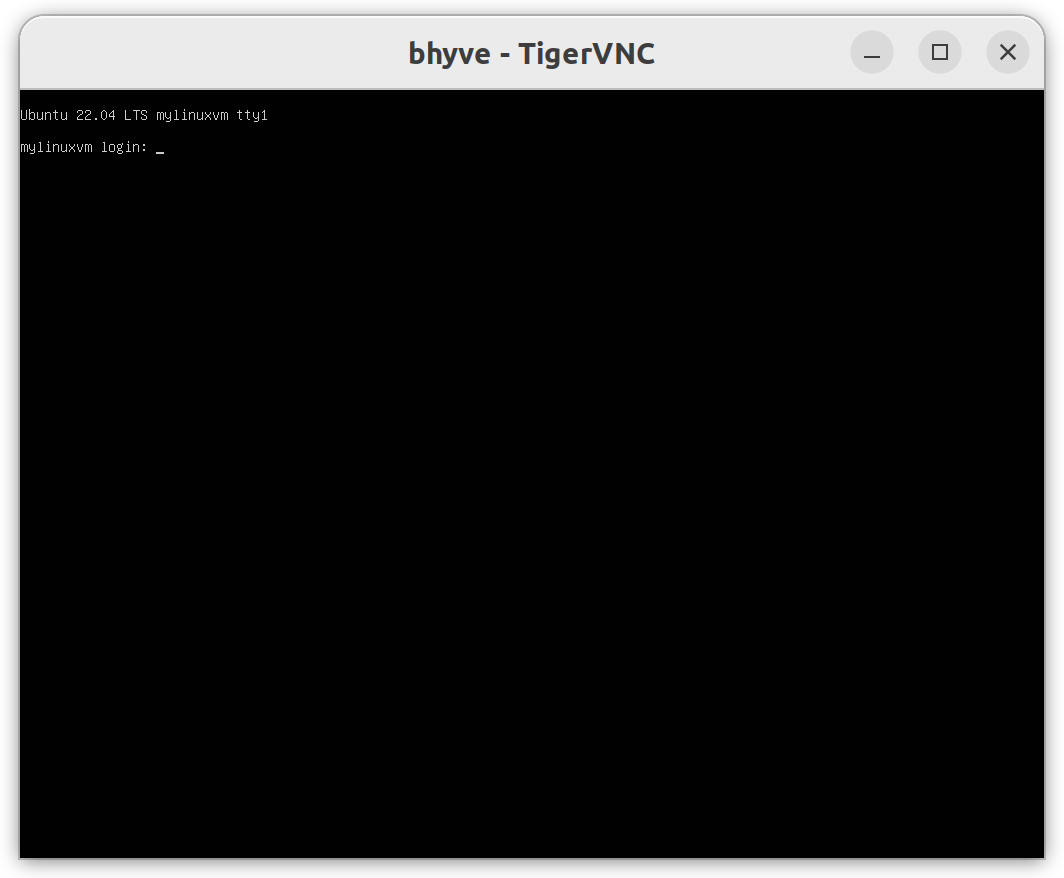 Once you’re done with the VM, you can run the following to stop and free the resources.

You can reboot your system to clear the following two changes, or manually revert them. Leaving them in place until the next reboot is probably harmless, though.

And that’s it! Now you know how to create a basic Linux VM on FreeBSD bhyve!

If you have questions or comments, you can @ me on Twitter.