We would like to use third party cookies and scripts to improve the functionality of this website. Approve Olipop Flavor Stack Ranking | Running In Production With Scissors

Disclaimer: we were not in any way paid or solicited by drinkolipop.com to write this review, but if they would like to give us a couple cases, we wouldn’t say no.

A couple months ago, Dan and Ana introduced me (i.e., got me addicted) to Olipop soft drinks. Olipop is a “new kind of soda,” one of those newfangled “functional drinks,” that are supposed to be both tasty and have some health benefits. In Olipop’s case, each can says that it supports digestive health. I can’t speak to that, but they are damn tasty.

There are 10 flavors available now, with Banana Cream being the newest addition. Even though we had tried most or all the flavors, Ana, Dan, and I decided to do a systematic review of each flavor. (Note: we later learned that Orange Cream is a “seasonal” flavor, and a previous seasonal flavor, Blackberry Vanilla, is currently not available.)

These tastings were split over several days, because that’s a lot of soda to consume at once. Comments have been reconstituted from hastily taken notes.

We tried these three flavors together in person when I visited Dan and Ana. 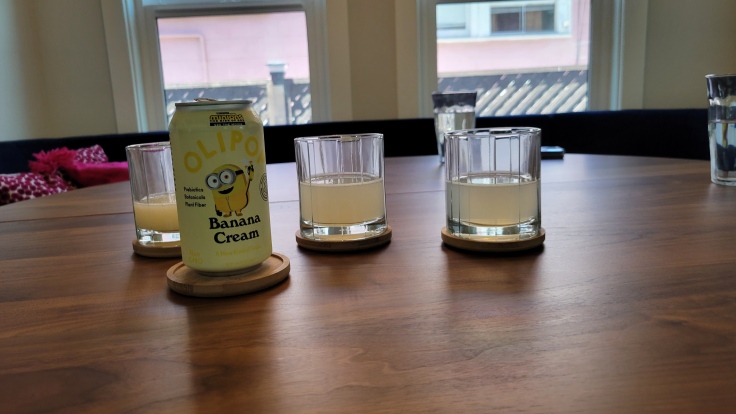 Someone didn't swirl the can enough before pouring

Banana Cream comes in a very yellow can emblazoned with, of all things, a Minion. This co-branding seems to be a first for Olipop, and Ana asked how this came to be, aside from the story on the side of the can.

Ana: It looks milkier with a slight thickness
Me: It looks like lemonade
Dan: I dunno, yellow?

Ana: It tastes less intense than it smells. It has light carbonation
Dan: Smooth mouthfeel, slight tingle
Me: What Ana said. It tastes sweet but not as chemical as it smells. It’s more like a tonic.

Me: Potable but not my first choice.
Dan: It’s ok I guess. An amusing novelty.
Ana: I think it’s nicely refreshing. Also not my first choice.
After I admit that I’d never seen of the Minion movies, Dan asks if I’m more likely to watch The Rise of Gru after drinking the Banana Cream. (No, I am not.) 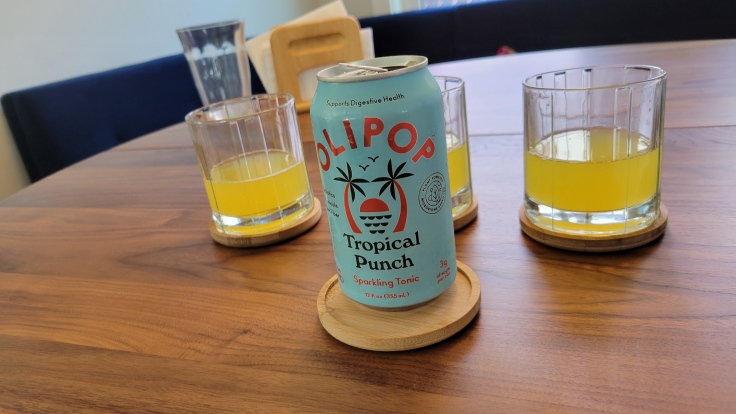 Dan had previously noted that the name Tropical Punch reminded him of Hawaiian Punch, that faux-tropical and vert faux-red soft drink purveying to suburban kids. (I can remember the color, although I can’t remember how it tastes. If I did taste it again, though, I would know.)

Me: Not dyed red like Hawaiian Punch
Ana notes this flavor isn’t as cloudy as the Banana Cream.
Dan: Looks like pee

Ana: Pineapple, much less intense than the banana
Dan: Smells like pineapple, although it doesn’t smell artificial like the banana
Me: Pineapple

Ana: Pineapple juice without the acidity, more sweetness
Me: Slight afternotes of passion fruit?
Dan: Not acidic. I can’t taste anything except the pineapple

Ana: It tastes like pineapple and very sweet. It’s not as carbonated as the banana.
Me: Very sweet
Dan: It makes me want to try real Hawaiian Punch again 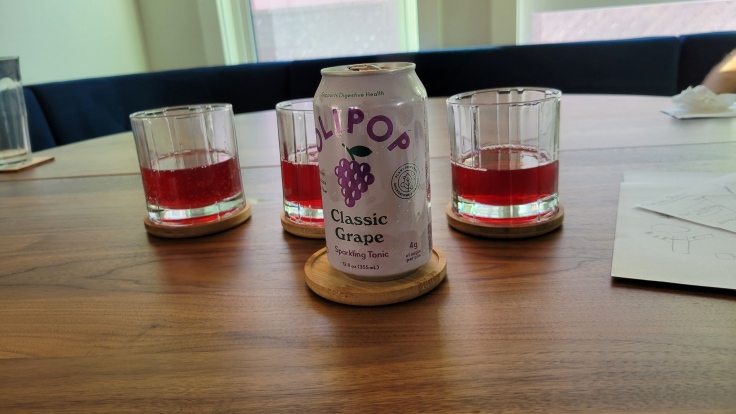 Ana: I can see bubbles. Prettiest color so far, like a deep red ruby
Dan and I agree it is very clear

Ana: The smell is not that strong. It smells like candy.
Dan: It smells like Welch’s Grape Juice
Me: Yeah, like the can of concentrate you’d get in the frozen food aisle

Ana: It feels less sweet than the others.
Dan: It has a sweet aftertaste that lingers
Ana: Tastes more artificial.
Me: I would drink it but probably only if it was the last can in the fridge

We all agree that the Tropical Punch is probably our favorite so far.

We performed this and the following tastings virtually over Zoom.

Ana, a naturalized American, starts by noting that she thinks of root beer as “one of those American things only Americans like.” Dan says that when they send her to American reprogramming camp, they will have A&W Root Beer there. I assume there will also be Hawaiian Punch and Welch’s grape juice.

Ana: Makes me think of something I get at the dentist, like mouthwash or toothpaste or something. Vague mint aftertaste
Dan: Like root beer but with some olipopness with it. No bite, more like being gently gummed.
Me: Definitely tastes weaker than A&W
Ana: I would definitely drink this if I was lost on a desert island and the others were gone. It’s less bad than I thought it would be.
Me: Tastes a little watered down.
Dan: It’s still one of my favorites
Dan (reading the label): “organic root beer flavor extract”

At this point I launch into my story about living in Pennsylvania as a kid, where the local pizza parlor had both a player piano and birch beer. We google to figure out the difference (the kind of tree roots used, unsurprisingly.) I can’t remember the taste difference after this many decades, though.

Me: Not a strong taste
Ana: Kind of pleasant, not very obviously strawberry. Mild compared to the root beer

Dan, reading the can: “Himalayan pink salt”
(A discussion about the pros, cons, and general questions around Himalayan pink salt ensued.)
Ana: I quite like this but closer to flavored sparkling water. Like it has been in the same room as a strawberry. Tastes less sweet than it smells, less sweet than the banana cream. (To Dan: Where’s the cat?)
Me: Pleasant unlike the powerwash of Cherry Vanilla (full review to follow)
Ana: tastes very one-note
Me: Less like Olipop pop
Dan: I’m still surprised by the Himalayan pink salt

Ana: Strawberry Vanilla, Tropical Punch, and Banana Cream are close together, a bit higher than Classic Grape. Classic Root Beer is decisively at the bottom.

Day Three: Battle of the Oranges

Olipop has two orange-themed flavors, Orange Squeeze and Orange Cream. We decided to try these two side-by-side as the best way to compare their orange-iness.

Me: Smells like orangeade
Dan: More pulp than orangeade. It looks like a Tropicana orange product that has been puréed then added back.
Ana: Smells more like orange juice than soda.
Me: It smells a little like Tang.

Me: Sedate taste
Ana: Like a more pleasant Tang
Dan: I like it
Ana: Quite good, my favorite so far
Me: Not too sweet
Ana: It actually has more sugar than some of the others
Dan: Light Olipop light carbonations
Ana: Like more diluted Orange Fanta but in a good way

Dan: They really have nailed that creamsicle flavor
Me: I taste the orange first and then the “cream”
(Notes both Orange Squeeze and Orange Cream have 12% juice)
Me: it’s not like there’s milkfat or some solid to give it that cream feel

Ana: Orange Squeeze and Orange Cream are at the top, depends on which I need

Note: Vintage Cola seems to be the only flavor with caffeine in it, which comes from some green tea.

Dan: It smells like coke on an airplane
Ana: Yeah, it absolutely does smell like that, why is that?
We agree it has the traditional coke/cola/pop color, although it’s not as fizzy
I try to describe how I think maybe it smells a little like RC Cola, but only because I can’t remember how that smells (as opposed to Coke or Pepsi)
Ana: It smells of cola in a way Coke doesn’t
Mostly I think it smells flat

I also think it tastes flat
Dan: It feels even flatter than their (Olipop’s) root beer
Ana: I enjoy it because it is more lightweight
We talk a lot about how we can’t help but compare it to the mainstream colas, good or bad.
Dan: I still like it
Me: I just think it tastes like flat off-brand cola

Dan always calls this flavor Cherry Pie, because he likened drinking one to the experience of having a McDonalds cherry pie shoved into one’s mouth.

Ana, looking at the color: Garnet
Dan: Black cherry
Both: very pretty color
Ana: I barely notice a scent, it’s almost herbal
Me: Light medicinal overtone
Dan: We’re starting to get closer to its true horrible nature
Dan: It smells like maraschino cherry
Me: No, not nearly as sweet as maraschino, and this also tastes like it was near an actual cherry
Dan (reads label): “White cherry flavor”

At this point we come to realize that while we’re definitely trying the same flavor, the cans’ labels and lists of ingredients differ slightly. Apparently my deliveries of some flavors are from more recent stock. We decide any differences are probably negligible.

Back to the Cherry Vanilla:
Ana: I like the flavor
Dan: I want to put a shot glass of this on top of an ice cream sundae.
Me: Yeah, it does seem one step away from a hyper-concentrated syrup. Vintage Cola is too diluted and this one isn’t diluted enough.

Here Dan wonders what goes in actual cherry pie filling, leading the conversation into a rabbit hole involving black birds and other avian pies, down to a poisoned pigeon pie in a Game of Thrones episode.

This is our final flavor of the ten available!

Ana: It looks like lemonade
Dan: Nice smelling. I smell some ginger and some lemon
Ana: A little cloudy
Me: I smell more ginger

Dan: I’m not a big fan of ginger
Ana: I really like this. It’s one of my favorites. It’s not very sweet at all.
Me: I really like strong ginger. I wish this had more bite. It’s very sedate. The lemon is more just an aftertaste, like a hint of acid.
Ana: It tastes less like a soda because it’s less sweet. It tastes more sophisticated.

Dan: I’m not sure I could tell when this goes flat. Very little carbonation.
We agree it’s probably the most “mature” of the flavors.

After some discussion and contemplation, we came up with our personal stack ranks. Ana notes that she doesn’t really have a favorite as much as a drink she’s more likely to select for different needs. We all agree that none of the flavors are completely bad.

Me: There’s nothing I would absolutely refuse to drink again.
Ana: I think the root beer is there for me.

Well, that’s our take on the existing Olipop flavors we can get our hands on! Maybe as we get to try more, we’ll add them here! Or not, we have short attention spans.