We would like to use third party cookies and scripts to improve the functionality of this website. Approve Adventures in Freebernetes: My Out-of-Control Plane | Running In Production With Scissors

Part 11 of experiments in FreeBSD and Kubernetes: Bootstrapping the Kubernetes Control Plane

In the previous post in this series, I created my Kubernetes cluster’s virtual machines, the cluster certificates, and client authentication files, following the tutorial in Kubernetes the Hard Way. I also set up an authoritative DNS server to handle my local zone on the hypervisor, as well as creating firewall rules to load balance across the three controller instances. Now I’m ready to bootstrap etcd.

A few details for reference:

First off, I fire up tmux, create three panes, then google to figure out how to split them more or less evenly. Then I spend another five minutes trying to fix the term type because I’ve finally lost patience with getting rows of q instead of a solid border. However, nothing I try seems to fix it and I can’t find anything on the net, so this is what my window looks like and why am I reading /etc/termcap in the year 2020? 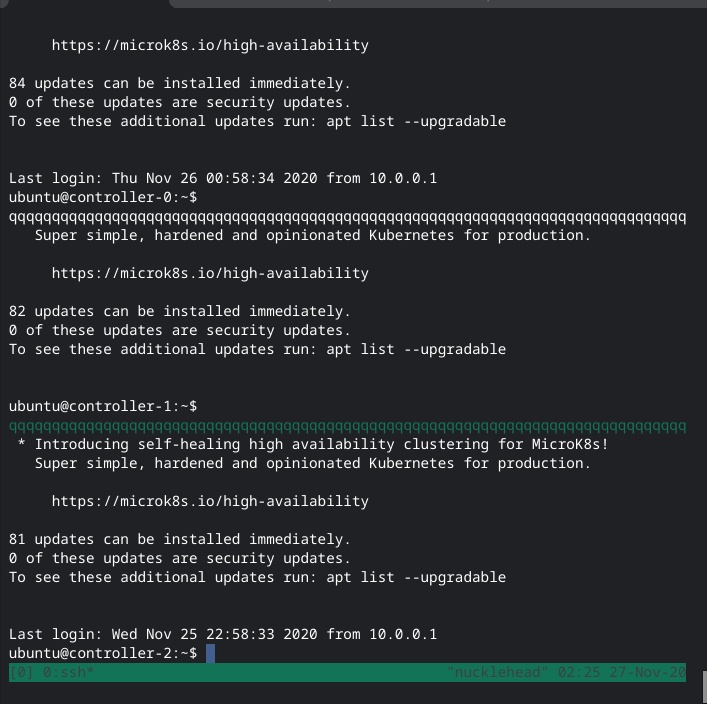 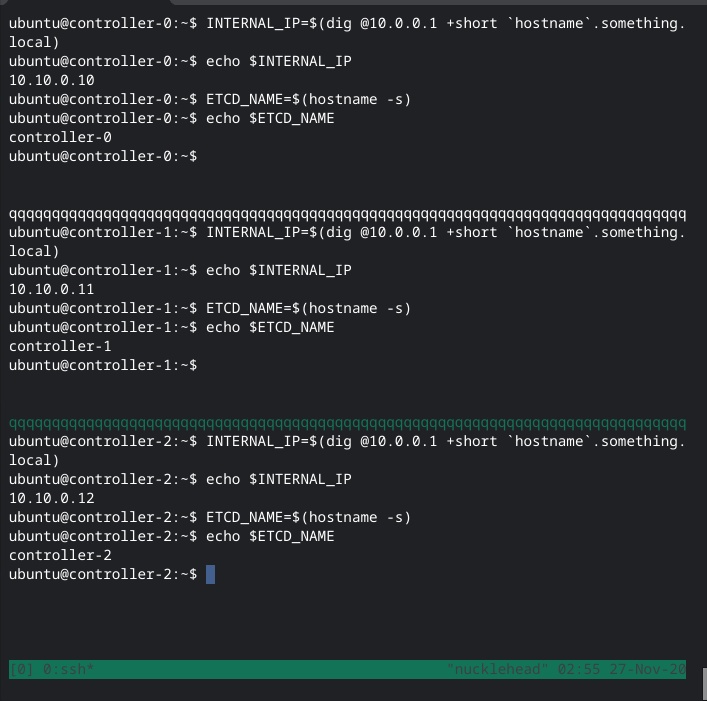 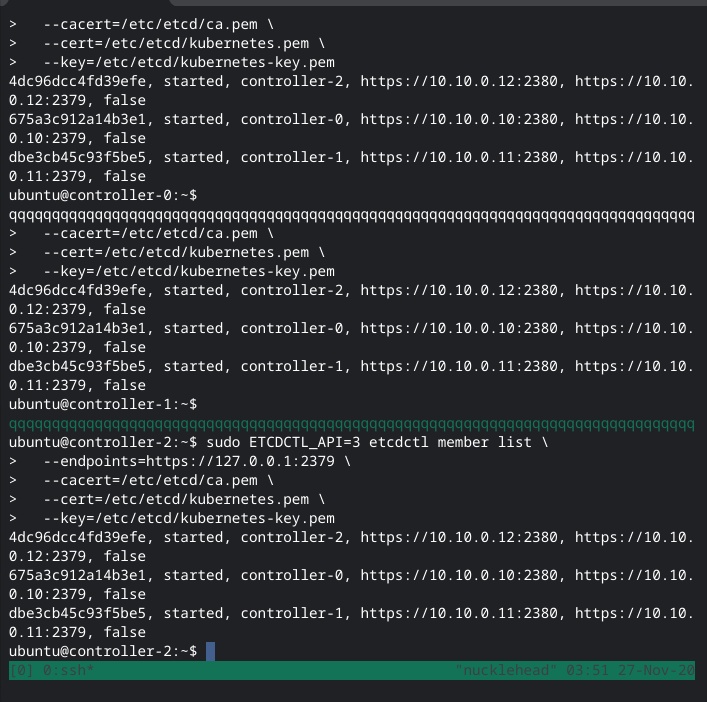 I didn’t read the section on certificate creation closely enough, so I missed the part about how the Kube API service IP should (must?) be part of a dedicated block for control plane services. My current kube-apiserver endpoint is currently in the same block as the VMs, so I will use 10.50.0.0/24 for the service block. I quickly redo the virtual IPs I added to the controllers and the ipfw rules on the hypervisor, then update the DNS record for kubernetes.something.local to 10.50.0.1.

After I set up the nginx reverse proxy with its passthrough to kube-apiserver’s /healthz endpoint on each controller, I wondered a bit if I should revisit the cut-rate load balancing I had set up using ipfw and VIPs. While it spreads the requests to the Kubernetes API’s virtual service address across the three controllers, it has no health check support to make sure it’s not sending a request to a server that cannot respond, and ipfw does not support such a thing.

I consider a few options:

I ended up not setting up CARP for a few reasons: 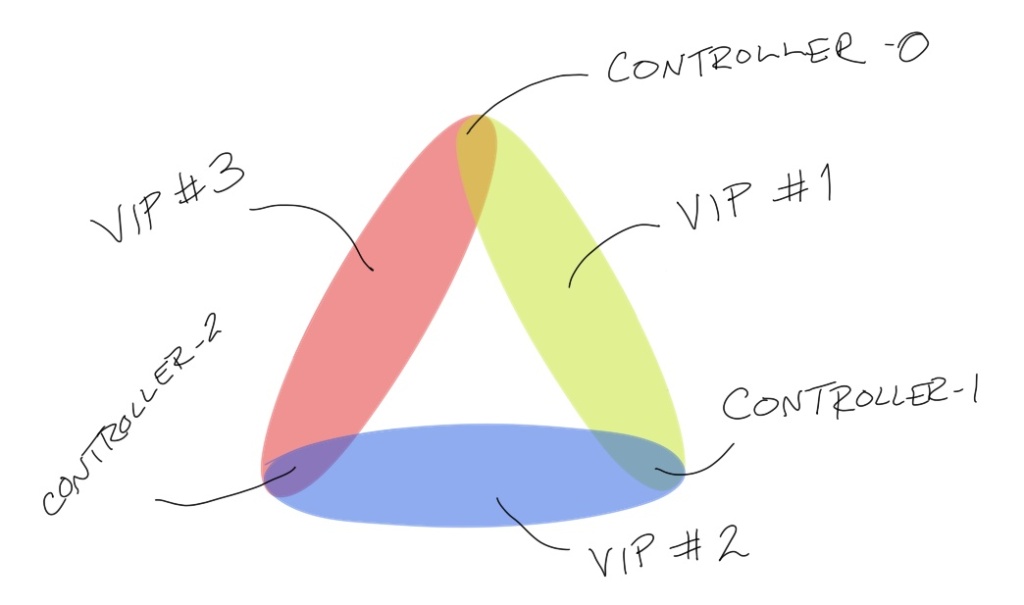 In the end, I decide not to implement a truly highly-available configuration because I’m not creating a production system, I already have more than one single point of failure (SPOF) so what’s one more, and I was hoping for a more elegant or a more interesting solution. I’d probably go with setting up a reverse proxy to use as a health-checking load balancer on the FreeBSD hypervisor if I really needed high availability in this scenario.

After escaping from that rabbit hole, it’s time to see if I set up the control plane correctly.

Well, that’s a no. It looks like I somehow missed adding the localhost endpoint when generating one of the certificates (probably the API server’s). And come to think of it, I also forgot to update the certificates when I changed the kubernetes.something.local IP address.

I regenerate kubernetes.pem and then copy it around. Both kube-apiserver and etcd use it, the latter for authenticating peer connections from the API server. I restart the services and… still get the error. I double check the generated cert with openssl x509 -in kubernetes.pem -text and yes, the hostnames are all there in the list of Subject Alternative Names (SANs).

Except it’s odd that the kubectl error tells me the only valid IP addresses are 10.10.0.1[0-2] (depending on the controller) and 10.0.0.1, the default gateway configured on the VMs. Sooo… I go digging. It looks like kube-apiserver’s default path for certificates is /var/run/kubernetes, which I had created per the tutorial. Sure enough, there were two files there which I had not created: apiserver.crt and apiserver.key. And when I ran the openssl x509 ... command on apiserver.crt, it only had two configured Subject Alternative Names: 10.10.0.1[0-2] (depending on the controller) and 10.0.0.1.

I delete those files, restart kube-apiserver and as I expected, it regenerates them, but they still have the same useless SANs. So, I stop everything again, and copy over the damn kubernetes.pem and kubernetes-key.pem (the ones I had created) from /var/lib/kubernetes to /var/run/kubernetes with the appropriate file names, fire everything up (again), and yay, shit works now, let’s move on. 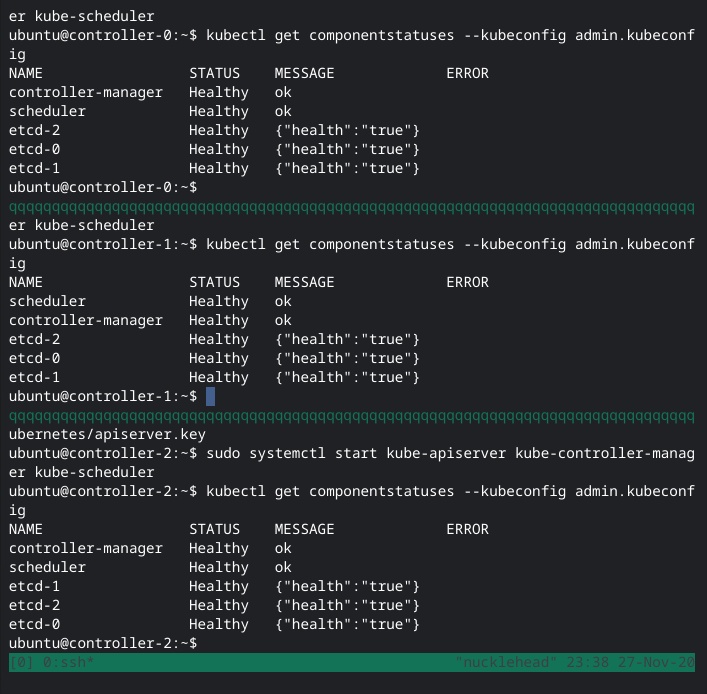 I configure kubelet RBAC, skip the section on creating a load balancer in Google Cloud since I have my ipfw rules in place and, you know, not in GCP. I test my fake load balancer endpoint, and everything works.

In the next installment, I’ll start off by bootstrapping the worker nodes and maybe finish building the cluster, depending, as always, on the number of rabbit holes I can’t resist.

Adventures in Freebernetes: Tripping to the Finish Line