We would like to use third party cookies and scripts to improve the functionality of this website. Approve Adventures in Freebernetes: bhyve My Guest | Running In Production With Scissors

Part 2 of experiments in FreeBSD and Kubernetes: Creating your first guest

bhyve (pronounced as “beehive”), FreeBSD’s type 2 (software) virtualization hypervisor, is pretty cool. It supports a number of operating systems as guest virtual machines (VMs), including not only the *BSD family, but also Linux, Illumos, and even Windows NT.

TIL MacOS's HyperKit is built on xhyve, a port of FreeBSD bhyve. Which doesn't surprise me, but cool.

Apropos reminder of Mac OS X’s FreeBSD roots, which are still tangled with its parent’s

CBSD will simplify managing your bhyve VMs, but first I want to create some manually, more or less, to get a taste of what goes on under the hood.

At this point, it should boot the FreeBSD installer/LiveCD image. If you let it go, it starts the installer or it may ask for console type first. (FYI, cons25w works best when I ssh to the FreeBSD host from my Chromebook Linux terminal.)

nucklehead gets its network configuration from my router’s DHCP service. bridge0 will also need an IP address. I ran dhclient bridge0 to get another IP address on my LAN from router via DHCP. em0 is the NUC’s ethernet interface. 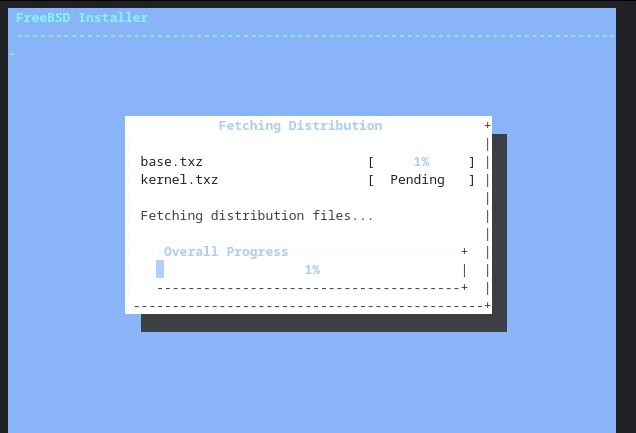 Once the installation finishes, you can use the Shell option to exit the VM so you can boot off the disk image.

The vmm kernel driver keeps a device file for each running VM:

If I shut down the VM, the vmm driver should remove it. If the device file persists after you think you have shut down the VM or bhyve exited with an error, you can remove the running VM with bhyvectl --destroy --vm=MYVMNAME. If no VMs remain, vmm.ko should also remove the directory /dev/vmm.

Note that Linux VMs require the grub-bhyve utility from the sysutils/grub2-bhyve port. If you just installed FreeBSD on your hypervisor and have not installed any ports yet, you will probably need to wait awhile (all night) while the dependencies compile. Plan accordingly.

While we wait for the grub-bhyve port and its dependencies to compile, let’s see what it takes to run a FreeBSD guest without the vmrun.sh helper script.

If we haven’t rebooted since our first experiment and don’t have any other VMs running, we shouldn’t need to (re)create the network interfaces. We will create a new img file, though.

I tried to create a FreeBSD VM building off the bhyve(8) man page but I kept getting errors like virtual machine cannot be booted. So I figured the vmrun.sh wrapper script was responsible for more magic than just the bhyve command line. I made a copy, added set -x to capture the actual commands it was running, and then spent 15 minutes trying to figure out why my file handle redirects weren’t working as intended. Oh. I forgot root defaults to /bin/csh on FreeBSD.

Oh, since when did root's shell default to csh on FreeBSD?

(For all I know, it's been "forever," but I forgot. But wondering why my patently-Bourne shell multi-file handle redirection wasn't working was making me nuts, until I finally thought to check...)

And if all goes well, it should boot the installer/live cd image and off you go.

The -s #,... options are my favorite. They create virtual PCI slots. (Be sure to check out the bhyve man page.) I am now having flashbacks to setting up CD burners on my home FreeBSD desktop a bazillion years ago.

The next post in this series will cover creating your Linux guest manually with bhyve. By then, with luck, your /usr/ports tree should have finished compiling.