We would like to use third party cookies and scripts to improve the functionality of this website. Approve So You Want To Be a Kubernetes Star | Running In Production With Scissors

(Hopefully) Practical advice for people who want to learn about Kubernetes 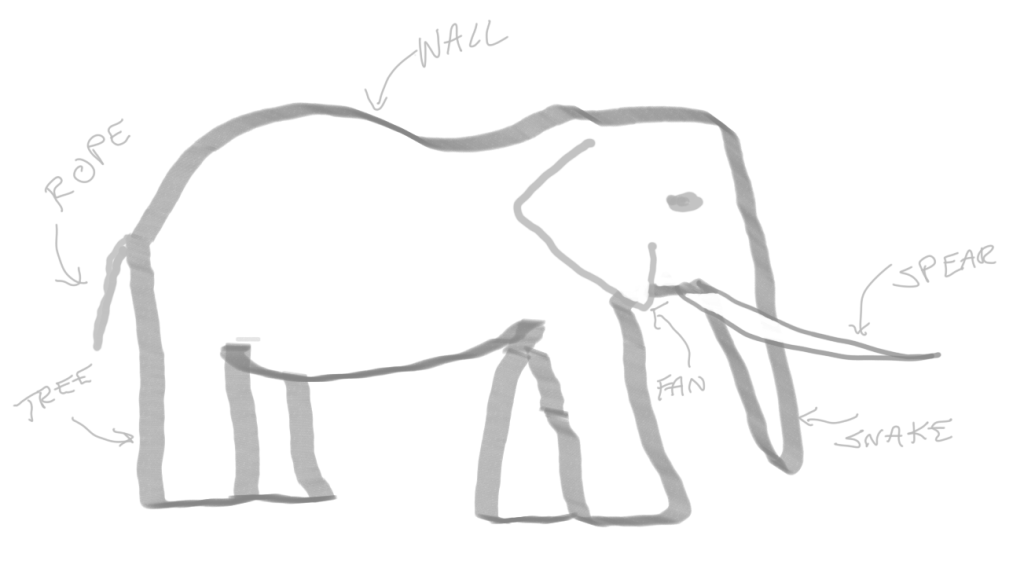 A famous ancient Indian parable tells the story of a group of blind men who come across an elephant for the first time. One man touches the trunk and thinks the animal is a large snake. Another man feels an ear and thinks it’s a large fan. One feels a leg and thinks it’s a tree trunk. The men who touch the tail think it’s rope, the tusk a spear, and the animal’s side is a wall.

This parable always comes to mind when I hear people, specifically engineers, say they “need to learn Kubernetes.” First of all, I wonder how many of them mean they have an actual forcing factor, or if they just “need” to the way I “need” ice cream sometimes.

Either way, I also wonder which part(s) of the elephant they think of as Kubernetes, or at least as the parts of Kubernetes they need to learn.

This post is a guide to what I think of as common basic starting points for learning about Kubernetes, who might most benefit from or use a particular focus, and where to find more information.

Kubernetes uses a lot of custom terms and acronyms that anyone starting off will need to learn. You’ll want to have at least basic familiarity with many of these before you start a tutorial, although after you have some hands-on experience, understanding the jargon and following documentation becomes easier with time.

Before you can tinker with a Kubernetes cluster, you will probably need to create one. Options, as well as which tools you could use, depend on the environment and resources at hand, whether bare-metal (which can even be a couple home PCs or laptops or even Raspberry Pis), a cloud provider, or a virtual environment running on a single computer.

For people who want to learn about the fundamental, low-level components of a Kubernetes cluster, you might want to build a cluster completely from scratch, either on the cloud or a couple computers you have lying around.

You might think your best option if you want to bring up a small cluster for experimentation quickly would be to try a cloud-managed Kubernetes service. However, the free-tier pricing here is confusing at best. Some free-ish/inexpensive options*:

Note that you may be responsible for disk storage, load balancer, or network traffic costs, depending on the cloud provider and your exact usage. Unfortunately, cloud pricing documentation is generally confusing, so be sure to watch check your usage costs frequently to avoid surprises.

If you have a Linux computer laying around, you might want to try using a tool like k3sup to create a lightweight Kubernetes cluster locally.

*Free tier offerings described here are current as of 08-2020 but may change at any time. Check the relevant cloud provider documentation for current offerings.

I assume this is what many, if not most, developers mean by “learning Kubernetes,” at least initially. Also, no matter what you need or plan to do with Kubernetes, you still almost certainly want to start with this basic skill and do it using the basic standards, namely kubectl and resource manifests in YAML.

Ironically, though, the tooling, configuration formats, and process of this most basic form of interaction varies wildly across different organizations using Kubernetes, as new tools and abstraction layers and methods for configuration management proliferate, including Helm, operators (which themselves must also get deployed; more on them later), more general infrastructure management tools like Terraform or Pulumi, or custom wrappers and automation, plus a growing suite of tools focused on continuous integration and deployment.

Writing and Containerizing Apps For Kubernetes

Developing for Kubernetes can mean many different things. Let’s break down some options.

For most application developers, in general, they probably do not need to learn anything particularly special about writing apps for deployment on Kubernetes clusters. Many stateless applications, from web servers to frontend apps to most backend services, have been lifted and shifted into Kubernetes deployments with few, if any, modifications. As long as the container build follows some best practices for manageability and playing nice in a multi-tenant system, you don’t really need to learn any magic if your focus is on moving from writing apps for “bare-metal” or other server-based deployment environments to writing the same types of applications to be deployed on Kubernetes clusters.

Stateful applications, like databases and other services which require data persistence, prove more complicated. In some cases, they may not require modification as long as sufficient service discovery and storage options exist in the cluster targeted for deployment. Stateful applications with more advanced or specific storage and networking needs may require customization or porting.

Extending and Integrating with Kubernetes

Powerful extensibility and the opportunities for customization are major factors for Kubernetes’ popularity and widespread adoption. Depending on where your interests or requirements fall, you may be looking to focus on one of the following areas.

While a Kubernetes cluster is, at least for the people who just need their apps to run somewhere, a good infrastructure abstraction layer, the logistics of getting that abstraction layer to function in various environments requires some glue.

In earlier releases of Kubernetes, environment-specific driver interfaces lived “in-tree,” as part of the main Kubernetes code tree. To decouple the development and code maintenance of the growing number of integrations and to ease porting of Kubernetes to new platforms, teams working on cloud native projects have defined specialized Application Programming Interfaces (APIs) for developers to use to extend Kubernetes device support.

Extensions are also sometimes needed for support of some hardware or device classes, including Graphics Processing Units (GPUs) or specialized device interfaces.

Custom Resource Definitions (CRDs) make up another point of extensibility for Kubernetes. If you’ve worked through a tutorial for deploying an application to a Kubernetes cluster, you’ve already encountered some Kubernetes resources: maybe a Deployment or ReplicaSet, a Service, and possibly a ConfigMap, or other standard types that you create and manage through the Kubernetes API.

You can also extend the Kubernetes API by creating Custom Resource Definitions. The possible use cases for CRDs are virtually endless, but let’s make up small example: an email address CRD. A YAML manifest for a resource object of our CRD type EmailAddress might look like this:

Creating a CRD object alone doesn’t do much. It does store the object in the cluster’s backing store, but without some piece of software watching for it, the object’s existence does not trigger any additional action. You could just use a CRD as a simple key-value database, with the kube-apiserver and the backing store handling data persistence, although this model would not scale well and could eventually impact general cluster performance.

Operators are a special class of controllers. Operators also use one or more CRDs and also run a control loop to handle the CRD object lifecycle, but they focus on managing other applications deployed in the cluster. For example, an operator for a RDBMS could, using the values in its CRD resources, deploy and configure the database engine, perform regular backups of the data, and also handle version upgrades.

While other extension types and interfaces with Kubernetes exist, the above list includes those areas that developers who say “I need to learn Kubernetes” are most likely to mean, at least initially. No starting point is really right or wrong, though. Some specific topics may be more immediately useful to you, or more interesting, or an easier jumping-off point to other topics.