What’s the scariest movie of all time?

How can a Hollywood Technicolor film from 1956 be the scariest movie of all time? Here’s how:

That alone should be enough. But wait! There’s more!

Let’s look at that. 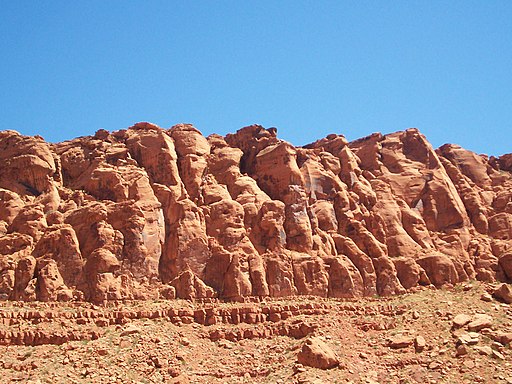 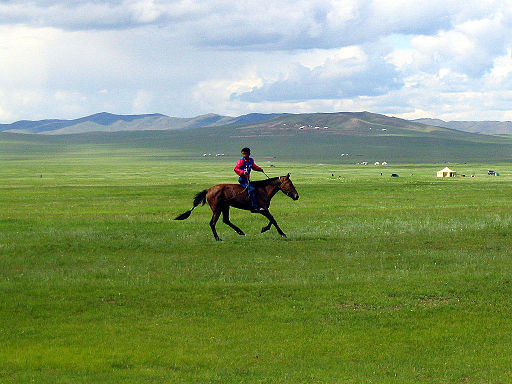 I tried to watch it once and the only thing I remember was John Wayne capturing Susan Hayward and treating her like chattel. I think I went into a kind of fugue state after that.

The movie would just be a another largely-forgotten studio system piece except for one fact: one of the filming locations in Utah, near the town of St George, was 137 miles downwind of ongoing US above-ground nuclear tests held at the Nevada Test Site starting in 1951. Part of the filming of The Conqueror took place on soil contaminated with radioactive fallout from the tests.

The cast and crew knew about the contamination, too. One oft-printed photo from the set shows John Wayne with a Geiger counter. However, no one at the time, and certainly not the general public, fully understood the dangers of this environmental exposure, although they had enough information to be concerned. More importantly, the federal government assured people living in these areas that they were safe.

To make matters worse, though, when production moved to Hollywood, producer Howard Hughes (yes, that Howard Hughes) had tons of the radioactive dirt hauled into the sound stage so the color would match to the location shots, thus not only prolonging exposure of the cast and crew but also closing them indoors with the radioactive dust and contaminating the sound stage.

By 1980, 25 years after filming, of the 220 cast and crew members who worked on the production, at least 91 had developed cancer and 46 had died from it, including stars John Wayne and Susan Hayward and director Dick Powell. While these rates are slightly higher than the national averages, debate continues as to whether or how much the radiation exposure during filming contributed to the elevated numbers.

The statistically significant increased cancer rates in permanent residents of St George and other “downwinders” of the Nevada Test Site carry no such uncertainty, though. Legislation passed by Congress in 1990 admitted that various agencies in the federal government had knowingly lied to and endangered its workers and the public for decades, in numerous cases related to the US nuclear arms program, including fallout from the Nevada Test Site.

During his decline, after the deaths of Wayne and Hayward, Howard Hughes reportedly felt guilty about the possible long-term health impact on the cast and crew and he withdrew the film from circulation until his death.

And that is why The Conqueror is a horror movie.

Toxicity in engineering teams and tech companies is a particularly hot topic right now, with increased public focus on the still-glaring lack of diversity in the industry. While that form of toxicity is particularly pernicious, cruel, harmful, and destructive, it comprises just one cluster of toxic contamination.

I like the duck-typing, “I know it when I see it” definition from this post, “Toxicity is apparent when an environment regularly takes away your energy to be productive or enthusiastic,” although it lacks the weight of the extremes of damage possible.

While some manifestations pertain directly to how some team members may (mis)treat their peers, overtly or not, at other times, it could be less ad hominem and more about normalized dysfunctions around engineering practice and decision-making that prevent quality work, or sometimes any work, from getting done. These counterproductive behaviors could take variations on that include the following forms:

These counterproductive behaviors can be obviously counterproductive or damaging, or sometimes they could be normally healthy practices taken to such an extreme, they have the opposite effect. Those good-behaviors-gone-bad can be much more difficult to recognize and counter.

Individual contributors can sometimes mitigate some of these situations on their own, but in the end, management needs to respond. And because managers are often at the core of perpetuating, if not creating, some of these issues, change has to be systemic, even if it initially seems to be localized to a single team.

I cannot say this enough: if any single team or even if one single person consistently demonstrates toxic behavior with impunity, you have a toxic culture. They are wasting someone’s time and quite probably causing real personal harm. If the human toll does not provide enough motivation, then look at the business toll. Work is not getting done, and when it does get done, it will likely be subpar. People will leave the company just to get away from that hell, and they will probably not be the people you want to see go.

If the toxicity seems to stem from patterns of behavior of otherwise genuinely well-meaning and capable people, the toxicity may be woven into the culture, and that needs to be addressed. Culture change is hard, but unhealthy engineering cultures are inefficient and ineffective.

Fix your toxic culture. Deal effectively with bad actors. Have difficult conversations. Empower people trying to do the right thing, to speak up and move the needle, and support them when they do. Don’t make promises you won’t keep and don’t lie. Just do it.

Choose Your Own Architecture